I was very pleased to learn that Merging Views, a short portrait which observes artist Seán Hillen as he creates a beautiful new photomontage, directed by Paddy Cahill and sound designed by myself won the Best Short Documentary award at the Galway Film Fleadh on Sunday night. Director of Photography on the project was Basil Al Rawi and it was produced by Tal Green.

In September last Dublin's O2 Arena (formerly the Point Depot) relaunched as the 3Arena. To celebrate this event, the iconic building became a canvas for 3 days as stunning visuals by Thinkhouse and Lightscape were projected upon its exterior. I was delighted to be invited to soundtrack this project which was a pleasure to work upon from start to finish. The central section which celebrates the history of pop music to date and references numerous iconic beats from pop history was particularly enjoyable to create, allowing me to reference many of pop's great tracks and genres. Some footage from the launch night below.

Beyond Pebbledash at the National Museum of Ireland

Beyond Pebbledash is an architectural installation which will remain onsite in the National Museum of Ireland until November 30th. The project was realised by the National Museum of Ireland, Dublin city Council and Redrawing Dublin and its construction was documented in a short video by Paddy Cahill for which I composed original music. I've included some more info on the piece below along with the video.

Beyond Pebbledash in Clarke Square is an architectural installation which aims to engage, challenge, provoke and inspire new ways of thinking about our city and urban architecture. The exhibition is on display from 27th August until 30th November 2014 at the National Museum of Ireland. The project involves the erection of a ‘typical’ Dublin pebbledash house, at a scale of 1:1. It is composed of a reconstructed pebbledash facade on a steel skeletal frame detailing its walls, stairs, doors, rear fenestration, ceilings and roof.

Beyond Pebbledash from Paddy Cahill on Vimeo.

Hy Brasil at Drop Everything 2014

I was recently invited to create audio for a site specific installation at the Drop Everything cultural biennial on Inis Oírr. Entitled Hy Brasil the piece is a project about islands and transience and was conceived and developed by Baz Holden, Brian Kenny and Mick Murray of Lightscape, Anthony Murphy of The Shadow Lab, Pat Murray and Tom O'Dea along with myself. It was a really exciting project to work on and has been very warmly received, described here by Laurence Mackin of the Irish Times as, "a series of light poles swelling and pulsing in complement to rich harmonies that shimmer out from the dunes," and by Una Mullally on her Pop Life blog as, "otherworldly and spectacular, with speakers hidden in the dunes at night as the lights danced on the edge of the sand." Many thanks to Peter Martin for the video featured here and to Conal Thomson for the photo below. There should be more documentation of this project to follow soon. 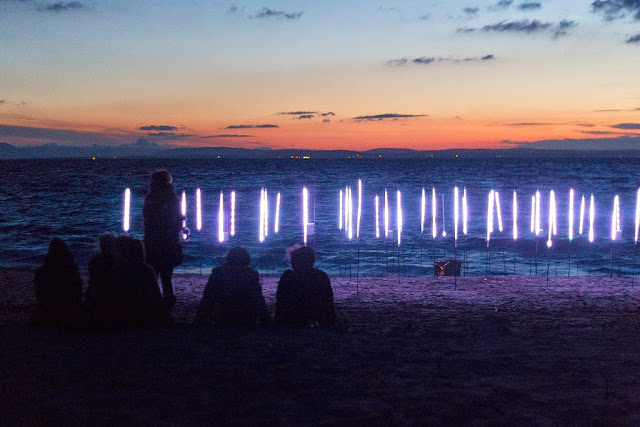 I recently curated a programme of experimental video shorts exploring connections between music and the moving image for the Cork French Film Festival. It features works by artists, composers, sound designers and filmakers from France and Ireland and will screen in the Gate Cinema, Cork on Saturday March 8th at 2pm. There are loads of really great artists involved, many of whom I came across in the process of compiling the programme and all of whom I'm very grateful to for allowing their work to be included. Full programme details are here, and below is a little taster from Olivier Campagne & Vivien Balzi with music by Brice Tillet.


5:46 am - Paris underwater from ArtefactoryLab on Vimeo.

13 Women, a live performance by Amanda Coogan in collaboration with twelve performers exploring the Church Street disaster of 1913 and its parallel with contemporary Irish society took place in the Hugh Lane Gallery on September 20th, 2013. 13 WOMEN - A Timelapse Performance Film is a moving image collaborative work by Coogan with Paddy Cahill featuring Sound Design/Composition by myself. It captures the entire 12 hours of the performance using time-lapse photography resulting in a new 8 minute film. The audio is based upon manipulated fragments of Stravinsky's The Rite of Spring which premiered to near rioting in May 1913.


13 WOMEN - a timelapse performance film from Paddy Cahill on Vimeo.

This work was commissioned by the Open House Limerick 2013 exhibition to celebrate their Places & Spaces exhibition theme. Paddy Cahill created a really great timelapse video highlighting Limerick City's built environment and showcasing some of the city's most interesting and attractive locations. I composed music for the piece and, in doing so, tried to enhance the vibrancy and positivity I felt the visuals conveyed.